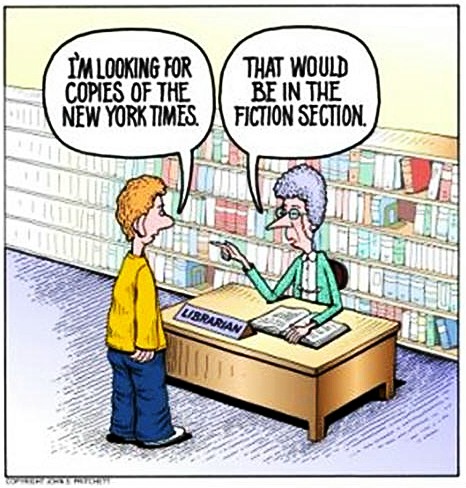 “Everything you read in newspapers is absolutely true, except for that rare story of which you happen to have first hand knowledge.” –Erwin Knoll

I offer the post below from Big Journalism as Exhibit “A” regarding a truth I learned many years ago in Vietnam:  The Mainstream Media Lies. Sometimes the lies are intentional, designed to sway public opinion for or against a policy, a certain course of action, a certain group disfavored by the liberal elite.  Sometimes they are unintentional: theoretically honest reportage, but filtered through the prism of the liberal paradigm–an inconvenient fact omitted here, an approbatory one included there.  When I was a journalism major in college, it was drilled into us that a news story was to contain  only the “who”, the “what”, the “where”, the “how”, and the “when”.  The “why” was the exclusive province of the editorial pages.  But my old professor is dead now.  So, it appears, is American journalism.

Of course the Society of Professional Journalists would have a “Diversity Committee.” How else could liberals continue on with the thought policing of which they became so fond in college? Now, according to the SPJ’s The Quill, they think the AP style book should be changed to provide amnesty to illegal aliens until they are proven to be in the U.S. illegally.

Frequent use of the phrases “illegal immigrant” and “illegal alien” by our mainstream media is being questioned in order to remain faithful to the principles of our U.S. Constitution.

SPJ’s Diversity Committee met during the 2010 convention in Las Vegas and decided to engage in a yearlong educational campaign designed to inform and sensitize journalists as to the best language to use when writing and reporting on undocumented immigrants.

Megyn Kelly picked up on the topic at Fox News. Now, TPM is taking out after her. Given that so many self-professed journalists so routinely perform journalistic malpractice of the JournoList variety today, in the spirit of being certain, I propose we stop calling all of them journalists. We can just call them something fun, like typing monkeys, until we’re absolutely convinced they are capable of producing something akin to objective journalism, as opposed to the usual liberal spew they regularly regurgitate on cue.

Unfortunately, thanks to foolish constructs like the SPJ’s diversity committee, what was once thought to be a vital, objective and independent force in American democracy – journalism, is very often little more than liberal tripe. Genuine free thinkers need no longer apply.

Plenty of conservatives are pretty upset over a campaign by the Society of Professional Journalists to convince reporters to stop using the terms “illegal aliens” and “illegal immigrants” in favor of “undocumented immigrant.” But none are as livid as perpetually outraged Fox News host Megyn Kelly, who on Wednesday afternoon asked if journalists were going to start calling rapists “non-consensual sex partners” next.

“You could say that a burglar is an unauthorized visitor. You know, you could say that a rapist is a non-consensual sex partner which, obviously, would be considered offensive to the victims of those crimes,” Kelly said. “So how far could you take this?”

11 Responses to P.C. In The Press Room – American Journalism, R.I.P.