State Of The Union? Precarious. 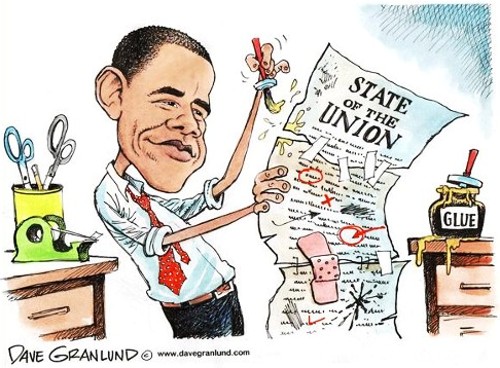 Obama’s Statist Of The Union Address

If you heard it, my condolences.  If you didn’t, my congratulations.  After two years of shackling American business and spending more cash than anyone in the history of the planet, our duplicitous Chief Executive last night attempted to pass himself off as a steadfast friend of Free Enterprise and determined foe of fiscal irresponsibility.  His face should have turned as red as his ideology.  Anthony Martin at Conservative Examiner offers an insightful critique:

[…]  While claiming that he supports budgetary restraint and a freeze on federal spending, he also called for ‘investment’ in America–a code term for increased spending of taxpayers’ money at a time when the country cannot afford it.

Thus, Obama’s words, yet again, prove to be a contradiction, not to mention that inherent in the Obama persona is a blatant incongruence between the President’s actions and his words.

Everybody’s Got Something To Hide (Except Me & My Monkey) 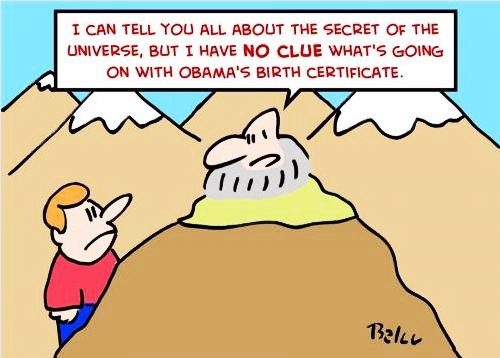 Gibbsy’s jibe below is both insulting and disingenuous.  Rational people have, contrary to Beltway Bobby’s dismissive remark, long ago concluded that where there’s smoke, there’s usually fire.  Obama is hiding something.  The only question is what.

[Press Secretary Robert] Gibbs snuck a jab at the so-called birthers who don’t believe Obama was born in Hawaii. “I think rational people have — have long ago, many when they first heard and saw the president, come to the conclusion of his citizenship,” he said.

Friend says Abercrombie told him, ‘There is no birth certificate!’ (American Thinker)

[…] When Evans spoke to Abercrombie on January 19, Abercrombie reportedly told him that he searched the relevant Hawaii hospitals using his powers as governor, and concluded, according to Evans, “There is no Barack Obama birth certificate in Hawaii, absolutely no proof at all that Obama was born in Hawaii.”

[…]  Has the focus on the birth certificate taken our eye off the ball on questions pertaining to the source of his funding for Harvard (i.e., foreign aid, foreign student loan applications) and the passport on which he traveled to Pakistan in 1981?

18 Responses to State Of The Union? Precarious.