Winter doesn’t end on the first day of Spring. At least not for me.  In my house, old King Cold isn’t overthrown until I hear the Man in Blue (or whatever designer color these effete moderns may be wearing) holler “Play Ball!”, and another season of Major League Baseball gets underway.  For us diehard fans, Opening Day is anticipated like Christmas morning when we were kids.  Every club stands at 0-0 and, like the gaily beribboned packages under the tree, you’re never quite sure what you’re going to get.  Non-baseball folk believe symptoms like these to be sure signs of encroaching derangement.  Those of us who hum “take me out to the ballgame” all year round know better.  With that in mind, I present, from Fleece Me’s blog, some illuminating thoughts on America’s Game. 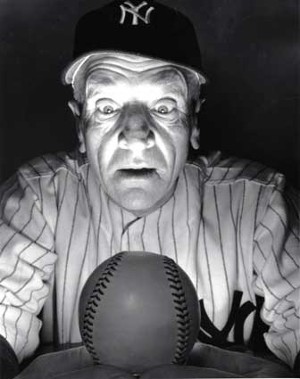 Opening day is six days away, and I can’t wait.  My Braves are going to prove to the horribly icky Phillies that a good farm system can overcome a big wallet and take the NL East back to where it belongs, Atlanta baby.

Why is baseball such a fantastic sport?  Other sports use balls (most do), some use bats (cricket is a sport right?), can’t think of any that use bases but not sure that is the evidence I am looking for.  Maybe it is the timeless nature of the sport? 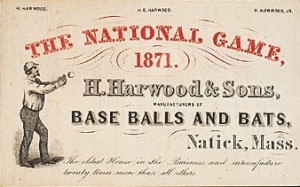 Baseball for the most part has remained relatively unchanged since its rules were codified into the game we know of today, sometime in the late 19th century.  Let’s look at the field.  All the bases are separated by 90 feet.  Ninety perfect feet that have guaranteed “bang-bang” plays at first base 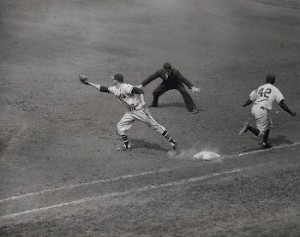 for over 100 years, despite the general consensus that athletes are bigger, stronger and faster today than they ever have been.  Ninety amazing feet that still make stealing second a “get out of your seat” moment to cheer for the intrepid thief.  And if he decides to embark on the next ninety feet to third, well what can be said, he is most definitely a burglar extraordinaire.  Whether it be Ty Cobb or Ricky Henderson, men separated professionally by 6 decades, the ninety feet has remained the same.

Howabout the pitching rubber.  60 feet 6 inches from home plate.  Anyone who has stood on one and faced a real pitcher knows how damn close that mound actually is, and has been 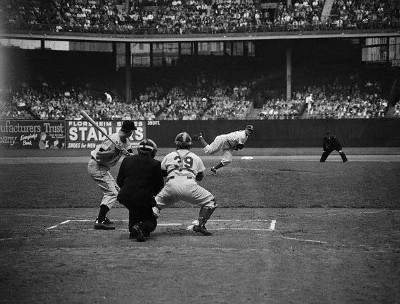 for over 100 years.  Whether it be the diminutive 5’5″ frame of 1952 MVP recipient Bobby Shantz, or the Zeus-like 6’10″ build of 5 time Cy Young Award winner Randy Johnson, that 60 feet 6 inch distance has remained the same.

To be sure, there are some differences on the fields as one goes from ballpark to ballpark, differences that actually enhance the game of baseball rather than detract from it.  Baseball understands that fields necessarily take up useful real-estate in bigger cities thus there is flexibility allowed in the outer boundaries of the diamond.  As long as the walls encircling the field are at least 320 feet along the foul-lines and over 400 feet to straight-away center, the dimensions of the outfield wall are as varied as the cities these fields occupy.  These rules only apply to stadiums built after 1958, so Fenway Park can have a left-field wall only 305-315 feet from home plate, of course, to knock one out, you need to overcome the 37 1/2 foot Green Monster first. The Green Monster of Fenway Park

Bostonians must be extremists, because the field the Redsox used before Fenway was the Huntington Avenue Grounds – the largest baseball field in history.  From left to right, the final dimensions of the field are thus, 350′ to left, 635′ to center, and 320′ to right.  That’s right, 635 feet to center field.  Jeez, I wonder how many triples and in the park homers were hit in that park? 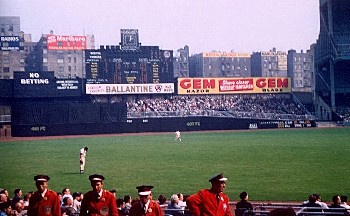 Because of these differences in outfield dimensions, parks gain notoriety as “pitcher’s” or “hitter’s” parks, and the park a team plays in can actually dictate the make-up of a manager’s team.  For example, my lovable Braves, famous for their unequalled 14 year reign at the top of their division, are known to field a good pitching team year in and year out.  Considering the dimensions of Turner Field, a definite pitcher’s park, the Braves’ focus on pitching is understandable. 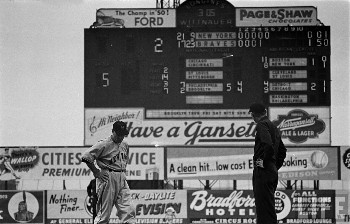 All these stats are interesting and fun to talk about, but it doesn’t answer the greater question, why is baseball America’s pastime?

Nothing in American life better encompasses the spirit of America than the game of baseball.  Its unique mix of individual responsibility in the grander scheme of team play is the essence of being a citizen of the United States.

Like in life, baseball forces you to stand before your peers and prove your worth.  When up to bat, there is no one to hide behind, no rules to let you off the hook, no friend to give you a leg-up, either you get on base or you go back to the bench.  For sure you have 24 other team mates behind you, possibly wielding a rally cap, hoping you make good contact and get the ball rolling, but if you fail, it is your fault and your fault alone.

But if you make contact, oh sweet contact, then you have achieved a singular moment of perfection few in life have tasted.

“The hardest thing to do in baseball is to hit a round baseball with a round bat, squarely.” – Ted Williams

In my opinion that is the hardest thing to do in all of sports.  And if Ted Williams, the greatest hitter of all time, considers it a tough endeavor, imagine the difficulty for us mere mortals?

No other sport shreds the veneer of hubris and machismo and exposes your pure unadulterated soul than baseball.  Hitting is so mental, the actual people who are good at it appear from the outside to actually have mental issues.  Professional baseball superstitions are renowned, from not changing your underwear on a hitting streak, to the greatest unwritten rule of all, not speaking to a pitcher during a no-hitter.

And that leads us to the second greatest aspect of baseball – it is a team sport.  While hitting for the most part is a singular activity where the help of your team mates is negligible at best, pitching and fielding is the exact opposite.  All nine players on the diamond work together in a cohesive unit to prevent the opposing team from scoring.  For sure, up until the opposing batter makes contact with a pitch, defense in solely the domain of the battery, or the pitcher and catcher for you laymen.

A pitcher’s job is to get the batter out, the method of achieving that goal can vary widely.  One can go the way of Hall-of-Famer Nolan Ryan, and just strike-out everyone you meet.  Or you can go the way of one of my personal faves, Tim Hudson, a sinker ball pitcher, unlike Ryan who feared contact, urges the hitter to swing at less than desirable pitches – pitches that have downward spin on them rendering the pitch “heavy” (some people equate hitting a sinker ball to hitting a bowling ball) so that the best a hitter can hope for is a “worm burner” through the infield.  Because Tim “pitches to contact”, his fellow defense on the field needs to be on their toes, his success is incumbent on their ability to field and throw properly.  A Tim Hudson performance requires the team to act as a cohesive unit, but again, like all things baseball, it starts with the individual pitcher being responsible to follow the game plan.

What else besides personal responsibility makes baseball the embodiment of America?  The game is a melting pot.  E pluribus unum translates to “Out of many, one”, which has multiple meanings.  In one case, it represents what I just spoke to, of the many players on the field, individual effort and ability is necessary for success.  On the other hand, it means that of all the races, creeds and nationalities that make up Major Leagues Baseball players, they are all “baseball men”.

Jackie Robinson stealing home, one of the most exciting plays in all sports

Baseball has long had representatives from around the globe – we have players from every country in the Americas, Canada to Brazil.  Europe?  Check.  Japan? Big time.  Australia? Yep.  I can’t find any true Africans, but the list of African-American players is long and honored.

Unlike other sports like football and basketball, baseball has the most varied make-up of its players.  Once can look at any baseball team and see a representation of America like no other.  If we look at the Braves, we have whites (one from Australia, Peter Moylan), blacks, Venezuelans, Arubans, Dominicans, Cubans, Japanese.  It is the true concept of a melting pot – that all cultures and races bring something different to the table, and only by combining them and assimilating those cultures into a synergism can the true potential of a group be realized.  Baseball and America both do this, though not so much anymore for the latter.

I know some of you readers are not big fans of baseball, that saddens me to no end.  Some people claim it is boring, not enough action, etc.  Baseball’s pace is another example of its inseparable connection to the country who spawned it.  The speed of baseball is deliberate, much like life.  But when the crack of the bat signifies like no other sport that the action is happening, the excitement is second to none.  What will you see, a Derek Jeter jump throw to first?  An over the shoulder basket catch a la Willie Mays?  Or a majestic moon shot over the outfield wall?  That lack of knowledge of what is to come brings me back time and again.

Like life, baseball does not allow you to take a break.  Even if your team is winning by 15 runs, if you aren’t on your toes the ball will find you and “eat you up”.  And you will be charged with an error, a stat category that sticks with you for the rest of your life, there is no asterisk beside it that says “this error didn’t matter, his team was stomping their opponent”.

And that is the true beauty of baseball, it isn’t measured by some arbitrary time limit that dictates when the game ends.  Each team has 27 outs, and unless there is a tie at the end of regulation,

Did I mention Chipper Jones is my favorite player?

when those 27 outs are used up, your team has either won or lost.  So again, like life, baseball reminds us we only have so many opportunities to make a name for ourselves – once we spend our “outs” no amount of hemming or hawing will give us another. 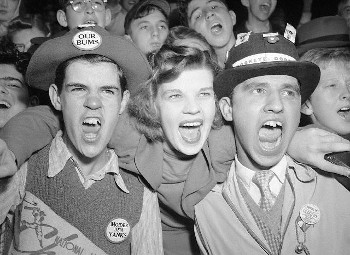 Baseball is an unforgiving sport, it finds and exposes your weaknesses.  Are you a rookie, incessantly riding the bench for the first half of the season?  Guess what, you will get your chance one of these days, and when that happens, when the “skipper” finally calls your name and sends you out to the field, the next play will involve you.  It is an immutable law of baseball, “the ball will find you”.  The baseball gods do not deign to give their proselytizers a mere second before measuring their worth.  And if you fail, they will test you again.

Obviously I love this game, and I hope my readers do as well, and if not, I pray my feeble words helped spark an interest in your souls that will motivate you to “catch a game” sometime this season.  Take the kids, grab some hotdogs and cold beer, some cracker-jacks for the tikes, and sit back and enjoy the greatest game on earth.  I know I will.

Me too, Fleece.  See you at the ballpark.