The Big Spenders have finally come to an agreement.  The debt ceiling–which is no ceiling at all, only a retractable roof—has been raised by trillions.  The touted cuts don’t really exist either, unless you believe that borrowing $9 instead of $10 is a reduction.  But what are you gonna do?  The country’s gonna stay on the ropes until the lefties get the boot.  And that better be soon—2 1/2 years of Progressive reign has dropped the growth in GNP to 1.3%.  Another 4 years, & we’ll all be paddling madly on the creek down which Obama has sent us. 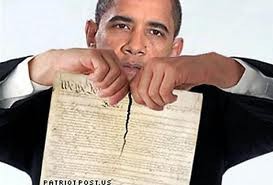 Meanwhile on dry land, Obama’s regulatory Reds proceed apace with their version of agrarian reform.  As reported by The Blaze:

The Federal Motor Carrier Safety Administration (FMCSA), part of the Department of Transportation (DOT), wants new standards that would require all farmers and everyone on the farm to obtain a CDL (Commercial Drivers License) in order to operate any farming equipment. The agency is going to accomplish this by reclassifying all farm vehicles and implements as Commercial Motor Vehicles (CMVs).

(It is also important to note here that DOT Secretary Ray LaHood holds a seat on the newly created White House Rural Council. A powerful group whose members have ties to George Soros and The Center For American Progress.)

The move by the DOT appears to be “legislation through regulation.” By reclassifying all farm vehicles and implements as Commercial Vehicles, the federal government will now be able to claim regulatory control over the estimated 800,000 farm workers in America, at the same time, overriding the rights of the states.

This is the kind of creeping tyranny that is causing many to believe that a second American civil war is inevitable:

Those of us who are committed to the concept of human freedom are not willing to give up another inch of liberty to the progressives. And we are committed to getting back the liberties lost in those dark areas of the country where the babbling, blathering bloviation of progressive buffoons holds sway.  [Why Bloody Civil War Is Inevitable–Anthony Martin, Conservative Examiner]

The Constitution of the United States is the document that not only describes but establishes the government of the United States. No one in the conservative movement, the Tea Party, or any liberty oriented group has remotely suggested that the government prescribed in the Constitution be overthrown. If anything is to be overthrown it is the progressive machine of the usurpers inside the government whose goal it is to destroy Constitutional government. These individuals are the aggressors who have mounted an all-out assault on the freedoms protected by the Constitution. And they are willing to use the force of the federal government to shove their anti-American views down the throats of those who love liberty. Those who resist such tyranny with force are not the usurpers nor the insurrectionists. The usurpers and insurrectionists are those who have slithered their way into government for one purpose–to overthrow the Constitution from within. [Bloody resistance vs. bloody aggression–a difficult concept? Anthony Martin, Conservative Examiner]

Strong words, indeed.  As are these, from the pen of Patrice Lewis (So you say you want a revolution?):

We the People are actually living in an occupied nation; the occupier – the enemy – is our own government. But progressives don’t see the problem. That is, they don’t see that an ever-growing governmental body is a bad thing – and they’d like to see more of it. They want our wealth redistributed. They want unconstitutional entitlements such as health care. They want the debt ceiling raised. They want everything they can lay their hands on when it comes to their agenda, and the Constitution be damned.

“The federal government is an out-of-control beast, no longer a body of representatives of the people but rather a house of aristocracy whose members do nothing unless it’s for the good of their house,” wrote a reader. “We the People have become nothing more than wage slaves to the gluttonous bloated entity our government has become. Nothing short of a military coup d’etat is capable of restoring our country back to the people, back to what was intended by the Founders.”

But I’m not so sure a coup d’etat would work. Oh sure, the tea party could take over Washington and begin to run the government within the original constraints intended by the Founding Fathers, but what then? The progressives would hate it. They would launch a counter-revolution. Civil war would ensue, and no matter who “won,” the problems would remain.

“We are not enemies, but friends. We must not be enemies. Though passion may have strained it must not break our bonds of affection. The mystic chords of memory, stretching from every battlefield and patriot grave to every living heart and hearthstone all over this broad land, will yet swell the chorus of the Union, when again touched, as surely they will be, by the better angels of our nature.”

Related stories: Snatching defeat from the jaws of victory…… (LeatherneckM31) —“The GOP’s Profiles in Courage is not much more than a pamphlet.”

News Flash __ Past Reports that the Great Recession Ended in June 2009 were Wrong! It Still Hasn’t Ended! (Conservatives On Fire) —“Do you see any sign that the people who govern us are serious about saving America? … Atlas is shrugging, my friends, and for good reason.”

Agenda 21? Family Farm under new attack (Bunkerville) —“Now why is Obama coming after the family farm?”

32 Responses to Trouble Comin’ Every Day