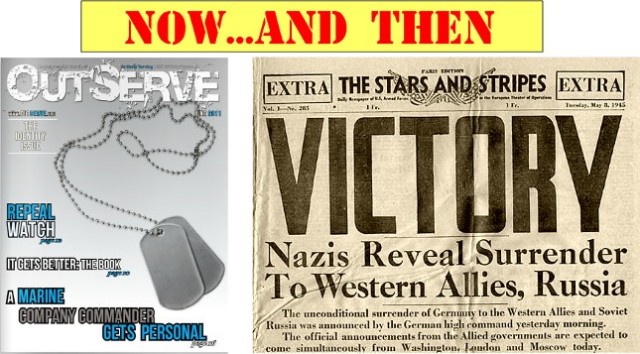 On September 20th, the very day that homosexuals can serve openly in the military forces of the United States, a magazine catering to their specialized minority tastes will go on sale at Army and Air Force post exchanges, presumably next to editions of the venerable old Stars and Stripes.  FOX News reports that

OutServe Magazine is a publication that “highlights the contributions that actively serving LGBTs are making to the United States military, discusses and educates readers about DADT repeal policies, and advocates for the continued fight for equality for all Americans.”

“Our first objective with the magazine is to let all the gay, lesbian, bi, and trans members currently serving know that they are not alone,” OutServe’s co-director, an active-duty officer who goes by the pseudonym JD Smith said in a written release. “And we also want to communicate to all troops that there are capable gay military members serving honorably, and that accepting that and moving on will make our military stronger.”

One of the features in the magazine is Ask Sarge—Answers To LGBT Military Issues, to which the following query was addressed:

I am a 26 year-old guy who recently entered the military. I arrived to my first duty station a few months ago and have noticed that I have become more agitated on a daily basis, and I’m not sure why that is. My supervisor is 4 years younger than I am and I live in the dorms. I just don’t understand why my life experience is pushed aside — I feel like I am treated like a toddler. What can I do? — UNDER-APPRECIATED DORM DWELLER

“Dorms”?? “Supervisors”?? An advice column for lovelorn homos in uniform?? Good God, what hath progressivism wrought?  In my day, you slept in a drafty barracks or in a tent or in the cold, hard arms of Mother Earth. You didn’t have “supervisors”, you had sergeants, grizzled non-coms who didn’t give a tinker’s dam about your “agitation”, and were more than willing to kick “under-appreciated” glutei maximi–that’s ‘asses’ to you effete new “dorm dwellers”—every hour on the hour if that’s what was needed to ensure that precious “life experience” was extinguished by the coarsening and toughening process absolutely essential in order to begin turning undisciplined civilians into smoothly functioning cogs in a vast killing machine; cogs ready, willing, and able to defend the United States of America by ruthlessly destroying its enemies on the battlefield.  Armed forces, you see, are not gentle social laboratories where newly recruited gender-benders and sodomites can sip mineral water and whine about their mistreatment by society.  Tough words? Maybe. But war’s a tough business, and there are no do-overs. Lose once, and you don’t get a second chance to make it right.  The open homosexuality mandated by Barack Obama and the Democrats in the U.S. Congress will inevitably be inimical to unit cohesiveness and effective military operations.  It cannot be otherwise, despite the blithe reassurances bandied about by irresponsible liberals who have never served and opportunistic trucklers in the Pentagon.  For God’s sake, people, the survival of the very country is at stake here. Barring an unlikely reversal of policy or a more stringent set of regulations than are currently in place, I suggest we all start learning to speak Chinese.

See As Those Caissons Go Mincing Along — “Liberals, once again confusing liberty with license, are celebrating the repeal of DADT as a victory for civil rights. It is not. It is advancing the questionable agenda of a vocal minority to the possible detriment of the nation.“