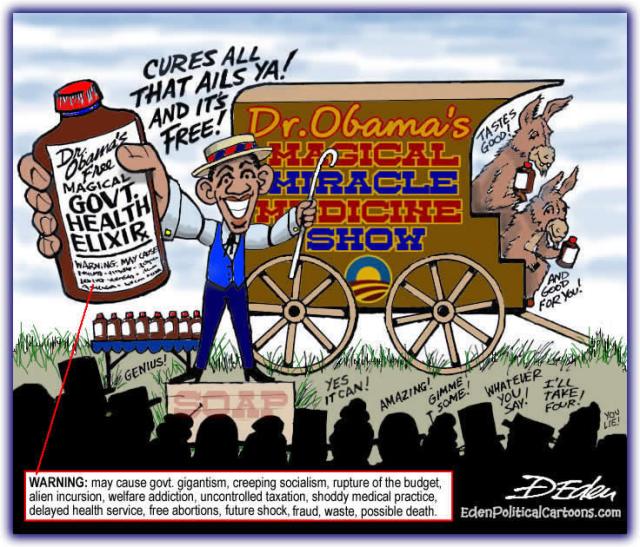 “A popular definition of insanity, variously attributed to Albert Einstein, Mark Twain, and Ben Franklin, is doing the same thing over and over and expecting different results. By this standard the President of the United States is clearly insane.”

Despite my long-held conviction that all liberals are in desperate need of emergency electroshock therapy, it’s beginning to dawn on me that the American people these days are also quite a few cards short of a full deck.  After all, we’re the ones who, in the midst of a worldwide war against Islamic terrorism, elevated a glib Marxist with the middle name “Hussein” to the highest office in the land.  And now we expect this same guy, a man who has for three years presided over the most anti-capitalist administration in American history, to suddenly promulgate policies that will reinvigorate the very private sector he so obviously despises?  Fat chance.  Barack Obama’s latest incursion into the economic sphere, a location as unfamiliar to him as the final resting place of the Titanic–where, incidentally, he is taking the entire country–sports a sticker price of $447 billion, and is essentially a repackaged, cheaper version of his last trillion dollar “shovel-ready” stimulus package.  Jobs? The only thing Obama knows about jobs is that in 499 days, he won’t have one.

But the man can read a teleprompter like nobody’s business, and the danger, of course, is that those poor, trusting fools in the hinterlands will fall for this medicine show malarkey and start lining up to buy bottles of the new and improved miracle elixir that Obama promises will definitely cure their rheumatiz this time while also eliminating the sneeze, the wheeze, and financial miseries.

And how do we know all this?  Because the good doctor says so, that’s how.  Step right up, Ladies and Gentlemen, “Pass this jobs bill, and we can put people to work rebuilding America. Everyone here knows that we have badly decaying roads and bridges all over this country. Our highways are clogged with traffic. Our skies are the most congested in the world.”

But, as John Hayward points out:

Obama already grabbed a trillion dollars for “infrastructure.” How can we still have all this decay and devastation? Where did all that money go? Why didn’t that bridge between Ohio and Kentucky get fixed last time? Shouldn’t Obama, his cabinet, his cronies, and the recipients of his lavish “stimulus” grants be answering those questions under oath? (The Obama Jobs Speech – Human Events)

Picky, picky.  Dr. Obama’s new and improved tonic is unrivaled in scope, and warranted by the doctor himself to contain nary a particle of any injurious substance.  No other formula available is as strong or as efficacious.  So step right up.  Guaranteed to regrow prosperity .  Er, strike that last.