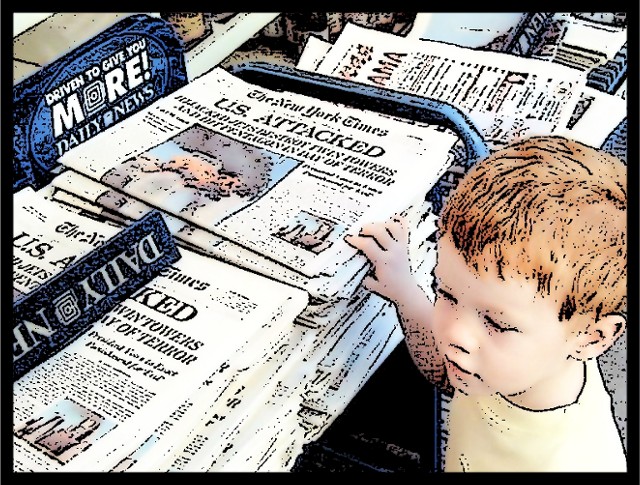 September 11, 2001…3,000 Americans were murdered by Muslim terrorists.  This is how a demagogic left-wing union thug and his pal the President choose to commemorate the occasion ten years later (Emphases mine):

[…] Just 10 years after 9/11, despite our vows, the public servants, construction workers and others who lost their lives or still suffer with the cancerous remnants of the Twin Towers haven’t just been forgotten. They’ve been vilified. The extremist small government posse has turned them into public enemy No. 1, as though teachers and firefighters, EMTs and nurses and union construction workers ruined America’s economy…

…We’ve seen the costs of hatred in ill-thought wars, in shameful attacks on immigrants and our LGBT neighbors. We saw it in the shooting of Rep. Gabrielle Giffords. We saw it in the racism that has found overt and covert expression since Barack Obama began his run for office—from outright declarations of people who said out loud they would never vote for a black man to the ridiculously persistent obsession with our president’s birth certificate. Regardless of his policies or priorities, President Obama is shadowed by the drumbeat of suspicion based on his “other”-ness. And those suspicions are fed and watered constantly by forces that were threatened by his message of “hope and change.”

Conveniently forgotten in Trumka’s deceitful diatribe regarding the so-called “costs of hatred” are, of course, his own.  From Discover The Networks:

In the spring of 1993, Trumka, in an effort to ensure that no one would be able to find employment as a miner without paying dues or agency fees to the UMW, ordered more than 17,000 mine workers to walk off their jobs. Moreover, he explicitly instructed striking miners to “kick the sh– out of every last one” of their fellow employees and mine operators who resisted union demands. In response, UMW enforcers vandalized homes, fired gunshots at a mine office, and cut off the power supply to another mine, temporarily trapping 93 miners underground.

Obama’s desecration of 9/11 is part of an effort to dumb down the nation and turn the solemn annual commemoration of the Sept. 11, 2001 atrocities into a meaningless feel-good event that glosses over both the horrors of that day and the evil intentions of the Islamofascist barbarians who made them happen.

At the behest of his radical constituencies, the administration’s plans were outlined in an Aug. 11, 2009 White House-sponsored teleconference call run by Obama ally Rev. Lennox Yearwood, president of the Hip Hop Caucus….on the call Yearwood and others said they wanted 9/11 to be used for something “positive,” “forward-leaning,” and “productive.” Their plan was to turn what they called a “day of fear” that they say helps Republicans into a day of activism that would help the Left. [Obama’s Defilement of 9/11]

A “Day of Fear”?  I hardly think so.  I believe most Americans will spend September 11th honoring the heroes of that dark day, mourning the dead, and contemplating with cold fury their murderers and the ideology that spawned them.  I know I will.

God Bless the USA (Freedom By the Way)

Lest We Forget (Conservatives On Fire)

The Morning Of September 11, 2001 Through My Eyes (Pumabydesign)

Nothing To Chance, Ten Years Later (Malcolm Andrews via The Sandgram)

The Day We Changed (Sentry Journal)

An amazing tribute and a message (Diary Of A Mad Conservative)

The American Horizon After 9/11 (Rogue Operator)

We will not forget September 11 (Bunkerville)

10 Years After 9.11 and Things are Getting Worse (Amusing Bunni’s Musings)

America Remembers 9/11 (What Would The Founders Think?)