Snakes Are Flexible Too 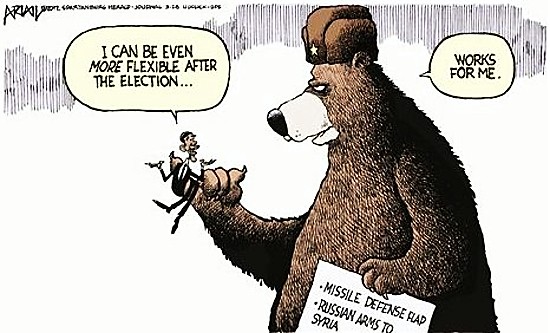 “On all these issues, but particularly missile defense, this, this can be solved but it’s important for him [Russian President Putin] to give me space. This is my last election. After my election I have more flexibility.” —Barack Obama

President Obama told a university audience in South Korea that the U.S. possesses more nuclear arms than it needs, and can reduce that arsenal without damaging America’s security. Obama: U.S. has more nukes than it needs

The prospect of four more years of Barack Obama’s Marxist ‘stewardship’ should be enough to induce blind panic in even the hardiest of American citizens.  This man (and the rest of his socialist compadres who masquerade as Democrats) needs to be sent packing before his plan to turn out the lights on the United States leaves us all sitting in permanent darkness.  That’s ‘fundamental transformation’ all right, but not of the sort that a gullible electorate thought they were getting when they foolishly allowed this man to Occupy and subvert an office to which he shouldn’t have been allowed within a hundred miles.   To wit:

Turner to Obama: What Flexibility?

Rep. Michael R. Turner (R., Ohio), chairman of the House Armed Services subcommittee on strategic forces, sought an explanation for the overheard comments made by the president Monday in a discussion in Seoul with Russian President Dmitri Medvedev…

Turner noted that during the December 2010 ratification debate over the New START arms treaty with Russia the president made specific promises that Russia’s opposition to U.S. missile defenses would not impact U.S. plans to deploy both short- and medium-range missile defenses in Europe and elsewhere.

Additionally, the president promised to make both “qualitative and quantitative improvements in its missile defenses,” Turner said.

“You have already walked away from detailed promises to modernize the U.S. nuclear deterrent; are you now planning to walk away from your promises regarding U.S. missile defense as well?” Turner asked.

Amid concerns that the administration planned to share highly classified missile defense secrets with Russia in an effort to assuage Moscow’s fears that U.S. defenses will target its missiles, the defense authorization bill signed into law by the president contains a provision that limits the president’s ability to share classified data with Russia.

“Congress took this step because it was clear based on official testimony and administration comments in the press that classified information about U.S. missile defenses, including hit-to-kill technology and velocity at burnout information, may be on the table as negotiating leverage for your reset with Russia,” Turner said, noting that the president said he may treat the limit as nonbinding when he signed the defense bill into law.

The comments in Seoul, in addition to the signing statement, “suggests that you and your administration have plans for U.S. missile defenses that you believe will not stand up to electoral scrutiny,” Turner said.

Issa on Obama’s Remarks to Medvedev: ‘He’s Going to Sell Out Our National Defense After the Election’

House Oversight and Government Reform Chairman Darrell Issa (R-Calif.) said Tuesday that “the American people should be very afraid” after hearing President Barack Obama’s accidentally recorded remarks to Russian President Dmitry Medvedev on Monday that after the election he would have more “flexibility” in dealing with the Russians.

“I judge that in fact he’s going to sell out our national defense after the election,” said Issa.

[…] the sane have already come to the conclusion that something is amiss in the Oval Office. After all, if you had taken a vodka shot for every time the president double-crossed America, you’d be drunker than a Russian sailor on payday.

There is only one thing scarier for the future of America than all of the debt and bad policies President Obama has built up since his 2008 election: It’s what the prospect of an Obama second term would bring. And the president isn’t being honest about what his secret plans are.

Is THIS the ‘flexibility’ Obama promised Russia on nukes?

The Bulletin of the Atomic Scientists, with [John] Holdren on the board of directors from 1984 until recently, has long petitioned for the U.S. to reduce its nuclear stockpiles. According to Pavel Sudoplatov, a former major-general in Soviet intelligence, this kind of work by the magazine editors was for the benefit of the Soviet Union.

The Bulletin of Atomic Scientists began publishing regularly in 1945, when it was founded by former physicists from the Manhattan Project, which developed the first atomic bomb.

In 1994, Sudoplatov, a former major-general in Soviet intelligence, identified Szilard and Oppenheimer as key sources of crucial atomic information to the Soviet Union.

See also: Obama Chides America as Only Country to Ever Use Nuclear Weapons via Maggie’s Notebook

21 Responses to Snakes Are Flexible Too