The Theory Of Evolution, Obama-Style 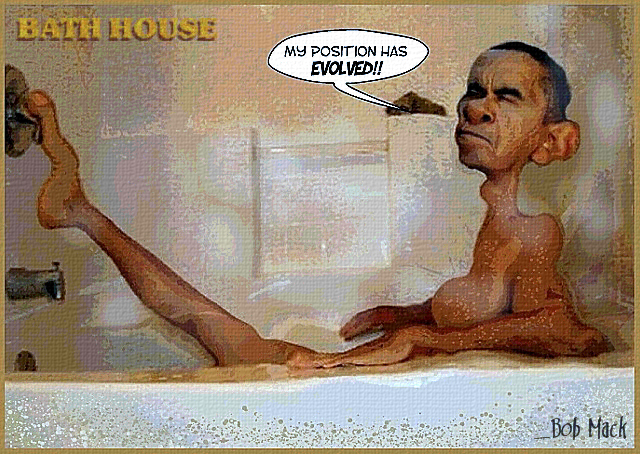 “Out of 28 states where constitutional amendments or initiatives that define marriage as the union of a man and a woman were put on the ballot in a voter referendum, voters in all 28 states voted to approve such amendments.”  —  Wikipedia

In keeping with his tradition of giving the American people what they don’t want, the progressive panderer ensconced in the Oval Office has gotten behind gay marriage, so to speak, while describing his previous public vacillations on the issue (always tailored, if less than impeccably, to an election year audience) as “evolutions”.  Funny choice of words, that, since if homosexuality was the norm throughout nature, there would be no species left to evolve from — no birds, no bees, and, best of all, no ‘Bama. But, leaving aside the trappings of religion, marriage is no more a legal and societal framework designed for the protection of the offspring resulting from the bonding of a man and a woman. Consequently, there can be no true marriage between same-sex individuals, only sterile pretense.

Obama knows this, of course, but as a cultural and political Marxist, the destruction of society’s norms is a necessary revolutionary tactic:

The Italian Marxist Antonio Gramsci and Hungarian Marxist Georg Lukacs contributed the most to this new cultural Marxism.  Among Marxists, Gramsci is noted for his theory that cultural hegemony is the means to class dominance. In his view, a new “Communist man” had to be created through a changed culture before any political revolution was possible... Georg Lukacs believed that for a new Marxist culture to emerge, the existing culture must be destroyed. He said, “I saw the revolutionary destruction of society as the one and only solution to the cultural contradictions of the epoch…. Such a worldwide overturning of values cannot take place without the annihilation of the old values and the creation of new ones by the revolutionaries.”  (Discover The Networks)

Despite cadres of committed radicals within the government, a news media subservient to the progressive ideology, a network of subversive intellectuals operating through the federally subsidized university system, and an entertainment industry increasingly devoted to the celebration of the perverse, selling communist cultural revolution to free American citizens is proving somewhat onerous:

[…] Some of the problems were just bad luck (hookers), some were just blunders (hot mic) but much of the rest has been about Obama trying to galvanize his base coalition and secure the massive donations he needs to finance the most expensive campaign in history.

His trip to New York on Monday was the best example yet. Obama delivered a groaner of a speech at Barnard College in which he did everything but shout “girl power” at the end.

And then in an appearance on a left-leaning ladies chat show, ABC’s “The View,” Obama rhapsodized about his partial reversion to previous support for gay marriage in advance of attending a fundraiser with his party’s fundraising shop for “gay, lesbian, bisexual and transgender” Democrats that featured Ricky Martin, he of Menudo, bikini briefs and “She Bangs.” 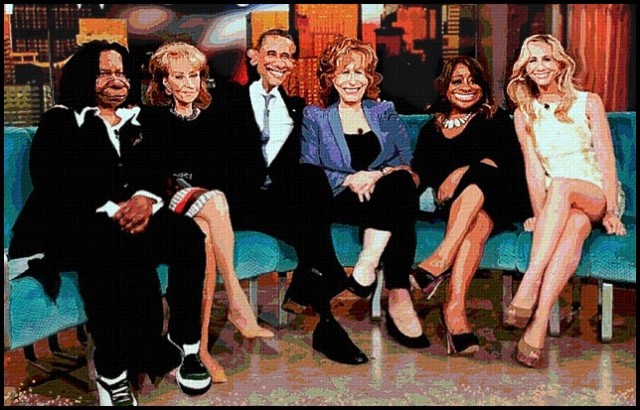 You need money to win Ohio, but it may not be worth the price of all this gay pride to get it.

A look at Gallup’s current electoral map serves to prove the point:

[…] If President Obama carries only those states where he had a net positive approval rating in 2011 (e.g. Michigan where he is up 48 percent to 44 percent), Obama would lose the 2012 election to the Republican nominee 323 electoral votes to 215.  (Conservative Byte) 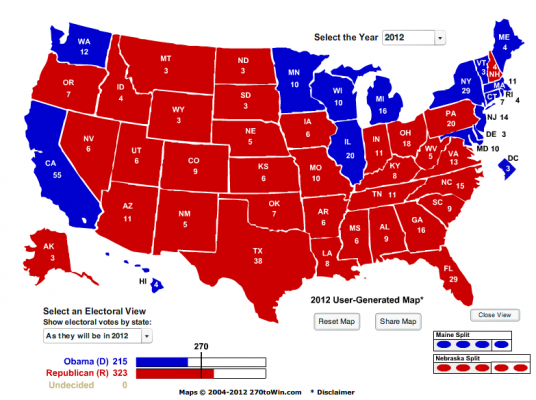 That, folks, is what is known as an ol’ fashioned, country a** kicking.  Maybe there’s hope for us yet.

See also: Why Obama Won’t Be Able To Hide Behind The 10th Amendment On Gay “Marriage” via Western Center For Journalism

13 Responses to The Theory Of Evolution, Obama-Style