“If anyone doubts that there is a God — and that He has a sense of humor — the Wisconsin State Motto is, yep, ‘Forward.’  You can’t make this stuff up.” — C. Edmund Wright (Big Labor’s Big Boo-Boo, via The American Thinker) 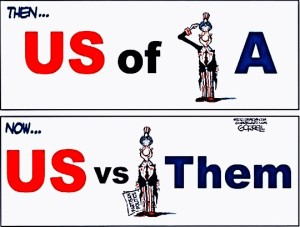 One thing Tuesday’s Wisconsin recall proved is that no blow is ever powerful enough to knock sense into a leftist.  The election of Scott Brown in formerly true blue Massachusetts, the historic rout of the Dems in the 2010 midterms, and now  — a clean and resounding G.O.P. electoral victory in a supposedly reliable Democratic redoubt. After a barrage of body shots like that, it’s a miracle that any portsiders are still standing.  Yet pundits like MSNBC’s Lawrence O’Donnell continue to offer their preposterous commentaries, leading us to wonder if they were watching the same scrap as everybody else:

By O’Donnell’s demented criteria, Waterloo should have provided a huge boost to the career of Napoleon, and the Battle of Gettysburg should have sealed the deal for Jefferson Davis and the old Confederacy.  But at least Larry hasn’t yet threatened bloody murder, like many others on the increasingly unhinged Left:

The Milwaukee Police Department said Wednesday it’s evaluating death threats made against Wisconsin Gov. Scott Walker on Twitter following the governor’s recall election victory. Political tensions in Wisconsin came to a fever pitch Tuesday night as the election results were announced. Multiple death threats surfaced on Twitter throughout the evening and into the morning. They were posted on the curation site Twitchy.com.

Speaking of unhinged, the always entertaining Gyro Gearloose of the Internet, the man whose personal Inconvenient Truth is that his own carbon “footprint” is bigger than a herd of overfed Sasquatch, the one and only Albert A. Gore Jr., appearing on his own television network as the ‘guest’ of former Empire State Democratic governor and serial whoremonger Eliot Spitzer, said of the recall:

“Well, I hope that we can get away from divisiveness, but as Billy Joel sang, we didn’t start the fire. The actions of Governor Walker in pursuing a very extreme, hard-right-wing divisive agenda really set the stage for this.” 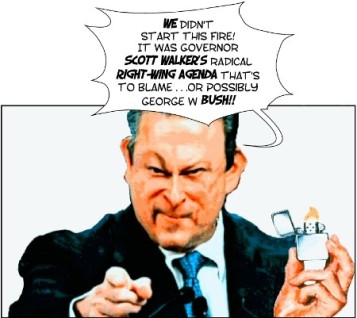 Junior hasn’t been right about much in his 64 years, but this particular fish story was a whopper even for him. What Walker’s “hard-right-wing divisive agenda” “set the stage” for in Wisconsin, of course, was an emphatic repudiation by the voters of just about everything in which Gore and the socialists believe.  And if it wasn’t Al and his arrogant, self-righteous pals who “started the fire”, who was it? I suppose it was George W. Bush.  It always is.

Or maybe not.  Maybe we’re just getting ready to rumble. That’s what Keith Poole of the University of California thinks.  His research indicates that:

[…] the partisan divide in Congress has accelerated in recent years and is worse than at any time since the end of the Civil War ... Increasing numbers of Americans simply do not get along politically and would rather fight than compromise.

With all due respect to Professor Poole, it’s been the past 50 years of mostly unrelenting accommodation with the architects of big government that has finally fractured the post-war American polity. Because for the socialists and globalists that infest the labyrinthine corridors of power, no conservative concession ever satisfies, and no conservative compromise is ever enough.  A line had to be drawn sometime, somewhere, and it appears to have been scratched in the sand of Wisconsin.

See: No hope in political no man’s land: Right wants no part of what’s left of political center

You Won’t Believe How Obama and Co. are Spinning the Wisconsin Recall Election | Godfather Politics

Worse now than then… | LeatherneckM31

Poll: 24% of Americans Believe States Have A Right To Secede, Up 10 Points Since Obama Took Office… | Weasel Zippers

18 Responses to Them vs Us