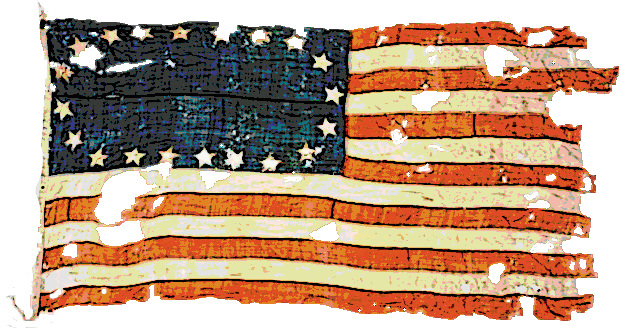 And to the REPUBLIC for which it stands …

“The human race divides politically into those who want people to be controlled and those who have no such desire.” — Robert A. Heinlein

“The urge to save humanity is almost always a false front for the urge to rule.” — H.L. Mencken

“The more corrupt the state, the more it legislates.” — Tacitus

“There never was a democracy yet that did not commit suicide.” — John Adams

who are “suspicious of centralized federal authority,” and “reverent of individual liberty” as “extreme right-wing” terrorists.

The report takes its definitions from a 2011 study entitled Profiles of Perpetrators of Terrorism, produced by the National Consortium for the Study of Terrorism and Responses to Terrorism, in which the following characteristics are used to identify terrorists.

[…] Under the FBI’s Communities Against Terrorism program, the bulk purchase of food is labeled as a potential indication of terrorist activity, as is using cash to pay for a cup of coffee, and showing an interest in web privacy when using the Internet in a public place …The DHS stoked controversy last year when it released a series of videos to promote the See Something, Say Something campaign in which almost all of the terrorists portrayed in the PSAs were white Americans. (Homeland Security Report Lists ‘Liberty Lovers’ As Terrorists)

The admonition of Pericles is as true today as when it was made 2,500 years ago:

But, like Rita in the video below, we’re still alive, and it’s America’s birthday.  So we might as well celebrate while we can: