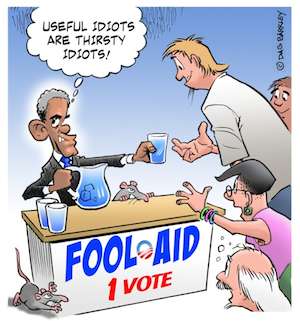 Useful Idiot: a pejorative term used in political jargon to describe people perceived as propagandists for a cause whose goals they do not understand, who are used cynically by the leaders of the cause

“All propaganda has to be popular and has to accommodate itself to the comprehension of the least intelligent of those whom it seeks to reach.” — Adolf Hitler

“Evil always wins through the strength of its splendid dupes…” — G.K. Chesterton

They’ll never change, these useful idiots of the Left; they never have. When at long last they’re herded to their knees with the rest of us, facing a muddy ditch while the impassive agents of change smoothly ratchet rounds into the chambers of their automatics, the final thoughts of the no-longer-useful will be that this must be some kind of horrible mistake instead of the inevitable result of a lifetime of lethal naivete. After all, they are the Good People, the bright ones, the trusting ones, the caring ones. This must all somehow be Bush’s fault.

When the Revolution eats its children, as it always does, the useful idiots are swallowed too. It’s safer that way. Because if you’ve sold your country out once, no one can ever be certain that you won’t do it again. And history teaches us that, when it comes to revolutionary justice, everyone must pay their fair share.

21 Responses to Idiots, Useful And Otherwise