“You can’t become a dictator through checks and balances.” — Tommy Chong 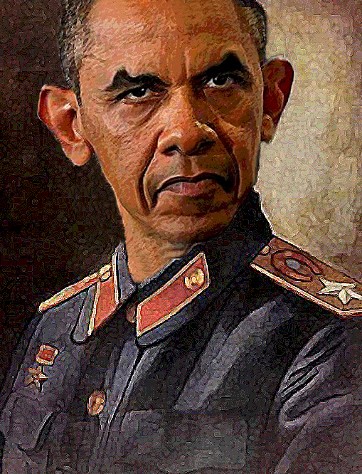 We’ve chosen as our Constitutional caretakers naked ideologues and incompetent hacks that a responsible electorate wouldn’t have trusted to remove soggy urinal cakes from a Tijuana truck stop. We’ve saddled ourselves with an executive branch headed by a Marxist narcissist with delusions of grandeur, an opposition party that doesn’t oppose much of anything except the voters who elected them, and a judiciary that routinely invents laws instead of interpreting them.

And it’s about to get worse.  Much worse.

Barack Obama, the communist who would be king, has arbitrarily decided that the American system of checks and balances does not apply to him.  He will rule by edict:

Obama is planning to bypass congressional Republicans with a surge of executive actions and orders on issues like voting rights, health care, job creation, the economy, climate change and immigration…

[Obama] is done caring about congressional Republicans calling him a dictator. Or calling him at all … administration officials and advisers say what’s ahead will be more extensive and frequent than previous efforts … (Politico)

Why not?  He got away with it before, and — with the average cojone in the Capitol as shriveled as a dessicated fig  — he’ll get away with it again.  We the People certainly aren’t going to stop him.  Hell, half of us are already docile wards of the State and the other half are on the watch lists of Obama’s security apparatus.

ObamaCare was legislated. In the second term, new law will come from him. (WSJ)