The SOTU Is FUBAR

Valka: “Don’t you know what “Stalin” means, funny man? Means man-of-steel. He takes from rich, and gives to poor.”

Zoran: “Yes, of course he does. Then he takes both of them, and puts them in Gulag for 25 years.”

Barack Obama is America’s own Man of Steal, and he’ll prove it again when he pontificates on the State of the Union on Tuesday.  The Over/Under for the number of times he utters the first person pronoun is 100.  Savvy bettors are, of course, playing the Over.

This years SOTU speech will  be historic in other ways as well.  It will likely mark the first time a sitting U.S. president (if that is what Obama ever was, considering his proclivity to rule by secrecy and decree) has dared issue a more open call for communism (i.e. income equality). 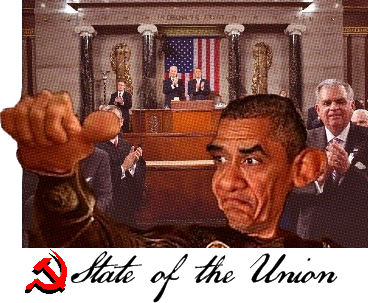 In a free society, attacking income inequality is a vicious public policy goal. Its anti-freedom ends are transparent, as is the power lust motivating such an agenda. Yet, the State of the Union Address will track familiar left-wing talking points. (Forbes)

But since Obama can’t convince half of Congress to impose socialism on a country that has never wanted it, he’ll have  to act as dictator:

“According to the Gallup Poll, after 1492 days in office for President Obama and President Bush, they have virtually identical public approval ratings of 46%. But Americans are 24% more dissatisfied with their government under Obama than under Bush … Democrats appear to be facing an epic election disaster.”(The American Thinker)

Of course, no respectable totalitarian state can exist without a chain of gulags in which to toss the  enemies of the “People” — at least those who managed to escape the government executioners. Start small and grow:

[…] it’s open season on conservatives, Christians, the Catholic Church, and Christian law firms. Liberty Counsel reports it has been targeted by the IRS. Franklin Graham’s ministry was targeted, as are hundreds of other groups refusing to goose step according to the dictates of Obama’s drum beat. Dr. Ben Carson, following remarks critical of Obama, was audited by the IRS for the first time in his life. Gov. Mike Huckabee is now being misrepresented and assaulted by national media for rightly criticizing the administration on a number of fronts …

Notice coordinated attacks on the governors of New Jersey and Virginia. Notice the conservative-condemning remarks by the governor of New York. Notice the arrest and indictment of conservative author and filmmaker Dinesh D’Souza. Notice harassment of reporters and threats leveled against James O’Keefe. Notice the bold-faced demand by Sen. Chuck Schumer of NY for more IRS harassment and targeting of the Tea Party. He readily acknowledges Congress will not act against his political enemies, so the IRS must be brought in to do his dirty work.  Experienced observers realize that when dealing with the Left, nothing is accidental … (Clash Daily)

After five years of Obama, the SOTU is FUBAR. Unless those parts of government that are supposed to do the checking and the balancing start doing their jobs, our Republic may not last for another three.

11 Responses to The SOTU Is FUBAR