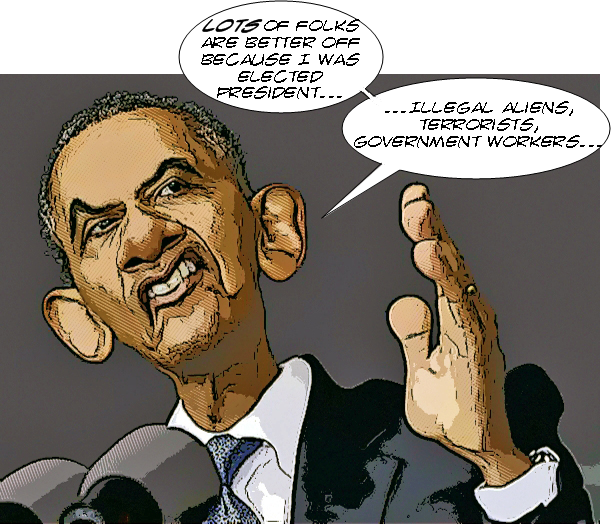 There is a grave threat in the White House.  If he is not thrown out or otherwise constrained in the near future, national security will inevitably become a top priority for Americans, forced by tragedy, not just to give up “piña coladas and getting caught in the rain,” but to survive a Dark Age into which their president led them. (No Mr. President, You are the ‘Serious Threat to Everybody’s Future’)

“I think this is an administration that, we’re coming to find out, is one of almost unimaginable incompetence…” — Brit Hume

It’s fortunate for both our enemies and the Democrats (terms no longer mutually exclusive) that the average American has the attention span of a geriatric squirrel.  Otherwise he or she might recall the fall of Saigon in ’75 and the killing fields of Cambodia — fiascoes likewise made possible by the Party of Cut and Run.

That the party of Harry Truman and John Kennedy has degenerated into a home for wayward socialists — Nancy Pelosi, Harry Reid, Hillary Clinton — is tragic; that the American people grant such odious scoundrels sanctuary in the nation’s capitol is bewildering; that they elevated a security risk like Barry Soetoro, AKA Barry Soebarkah, AKA Barack Obama to the highest office in the land is a downright travesty.

The current President of the United States is a man with a past murkier than a cup of Turkish coffee; a man who serves an ideology as red as an oozing tomato; a man who heads the most corrupt and lawless gang of miscreants to come out of Chicago since Prohibition.  And he’s either the most incompetent individual to ever rest his bony keister on the Presidential seal, or he’s the most treacherous.  And no one seems to care.

“It doesn’t matter a whit what’s going on with the popularity of the president. He may lose the Senate, but he is governing without the Congress. He has got his — he has got his own Constitution that he is operating under. He now regulates the entire healthcare system. And the story that was missed among all the scandals that are supposedly undoing his presidency is the climate change regulations. This is all by regulation. Nothing in legislation. He doesn’t need the Congress, which is going to revolutionize and put control of U.S. energy, which is the U.S. economy, in the Environmental Protection Agency. You want to run America? Don’t run for the presidency. Get yourself appointed head of the E.P.A. It makes Stalin’s five-year plans look like a picnic… “ (Is the Obama administration finished?)