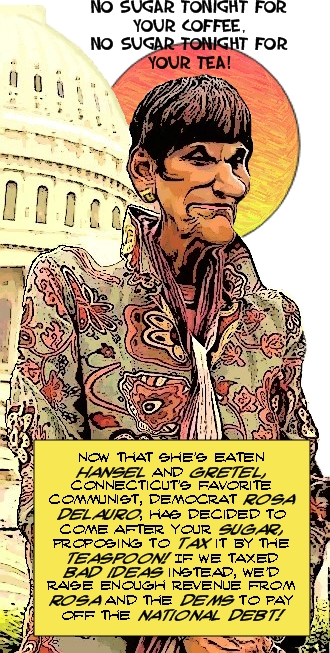 “Looking at the Senate, P.J. O’Rourke famously quipped that ‘The founding fathers, in their wisdom, devised a method by which our republic can take one hundred of its most prominent numbskulls and keep them out of the private sector where they might do actual harm.’ Of course, these days, the zaniest inmates have escaped their asylum …” (Our Increasingly Insane Political Class)

Connecticut’s state bird is the American robin. Given the representatives they persist in sending to Congress, they may want to change it to the cuckoo.   From the phony Vietnam veteran, Richard Blumenthal, to Rosa DeLauro, the cookie monster communist with the Moe Howard hairdo, the Transplant State is bidding fair to supplant Washington, D.C. as the most liberal territory in the Land of the Semi-Free.

4 Responses to No Sugar Tonight