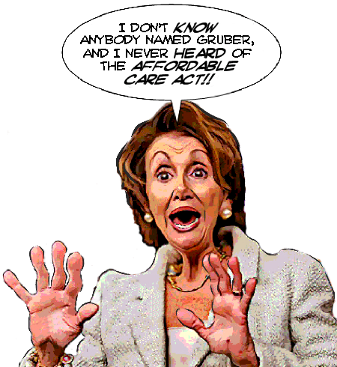 “Nancy Pelosi claimed Thursday she didn’t know who ObamaCare architect Jonathan Gruber is, after several tapes surfaced showing him gloating about how the law was written to take advantage of the stupidity of the American voter. Problem is, Gruber’s analysis of the law was cited extensively by her office back in 2009. Pelosi, the House Democratic leader, tried to downplay Gruber’s role during a press conference on Thursday. She claimed she doesn’t know who he is, and that he didn’t help write the law. ‘Let’s put him aside,’ she said.” — Fox News

“Ye have taken my silver and my gold, and have carried into your temples my goodly and pleasant things.” — Joel 3:5

We’re a contentious bunch here in the U.S.A.  Always have been.  You could look it up.  Whether it’s Patriots vs King’s Men, North vs South, or Democrats vs Real Americans, 50 percent of us don’t much like the other 50 percent 100 percent of the time. But the six years of resolute arrogance, steely ineptitude, serial prevarication, and socialist buffoonery to which Barack Obama, Nancy Pelosi, Harry Reid, and the rest of the Jackass Axis has subjected the nation has those numbers changing faster than Clark Kent in a phone booth:

After the midterm elections that saw the Democratic Party suffer significant losses in Congress, a record-low 36% of Americans say they have a favorable opinion of the party … (Gallup)

A new Gallup poll released Tuesday showed that the majority of Americans trust the incoming Republican Congress over President Obama to set the nation on the right track. 53 percent of respondents indicated they preferred Republicans in Congress to lead the direction of the United States, while only 36 percent preferred Obama. (Washington Free Beacon)

[…] Gradually it is sinking in to Official Washington that the 2014 election could very well do to Democrats what the 1930 election did to Republicans: make them irrelevant for at least a generation. (Don Surber)

Treating the 10 Commandments like the 10 Suggestions hasn’t done Obama and the Dems much good.  The People are finally on to them.  Heck, even Barry’s media harlots are beginning to echo the words of Sheldon Cooper: What if something happens? I’d never forgive myself if I wasn’t at his bedside to say ‘I told you so.’

But the Democrats themselves have learned nothing from their election day drubbing. Dirty Harry, a.k.a. Senator Reid, the new minority leader, has drafted the faux Indian princess Red Lizzie Warren into a faux leadership role, i.e. “strategic policy adviser to the Democratic Policy and Communications Committee — a specially created position” (Politico), from which she can instruct the Faithful on the economic benefits of becoming more like Communist China. 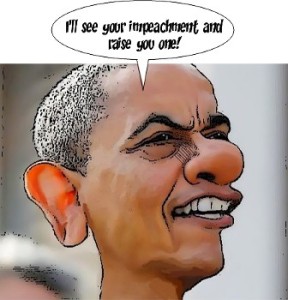 Barack Obama is doubling down on every abhorrent Marxist idea he’s ever had.  And the demented Ms. Pelosi is babbling incoherently in a corner of the Rayburn Building where the sun never shines:

Was this the worst election for House Democrats since 1928? Or was it merely their worst since 1946? Either way, the results do not reflect well on the House Democratic leader, Nancy Pelosi — a conclusion that seems to have escaped Nancy Pelosi.

“I do not believe what happened the other night is a wave…”  She preferred to describe what happened in the House elections as “an ebb tide.”  If Democrats lose three of the five undecided races, they will have ebbed all the way back to the day Herbert Hoover won the presidency. (Nancy Pelosi, partisan warrior in denial)

No wonder anything that’s bad for this bunch of addle-pated lefties is by definition good for America.