“Did it ever occur to anybody that a man who blubbers in public that much has serious issues and isn’t fit to lead?” — John Hawkins

… According to those sources, outgoing House Speaker John Boehner and Minority Leader Nancy Pelosi agreed that her Democratic caucus would join Boehner along with a handful of Boehner loyalists and moderate establishment Republicans to continue Planned Parenthood funding, along with a few other budget items President Obama says were must-haves, in order to avoid a Government shutdown.

Boehner resigned because he knew that after he cut that deal, conservatives in his own party would be so furious with him that it would make challenges to his Speakership a certainty, sources say. Even if he survived those challenges, his remaining year and three months in office would be contentious and personally uncomfortable for him. 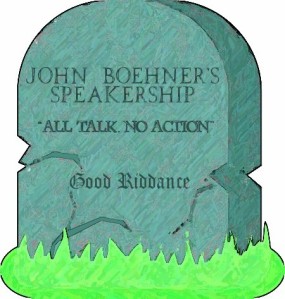 “Boehner is despised by the younger, more conservative members of the House Republican Conference. They are repelled by his personal behavior. He is louche, alcoholic, lazy, and without any commitment to any principle. Boehner has already tried to buy the members with campaign contributions and committee assignments, which he has already promised to potentially difficult members. His hold is insecure. He is not [Newt] Gingrich, the natural leader of a ‘revolution,’ riding the crest into power. He is careworn and threadbare, banal and hollow, holding nobody’s enduring loyalty.” — Sidney Blumenthal in a private email to Hillary Clinton (Boehner Resigned? Good. Go Cry, Drink And Surrender Somewhere Else)