Lady And The Trump

”Some of my best deals were made by my son, Donald…everything he touches seems to turn to gold.” — Fred C. Trump

It’s a wonder that anyone other than the next-of-kin would want a Clinton back in the Oval Office, especially the distaff half of the infamous duo from Arkansas and arguably the more corrupt. But for modern Democrats, emotion and ideology will always trump (if you’ll pardon the pun) reason and common sense.  The presumptive Democratic nominee for President of the United States in 2016 is a political slug whose trail of slime stretches back to the ’70s, a woman whose former boss said of her: 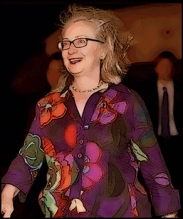 And nothing has changed. Currently under investigation by the FBI for her mishandling of classified material via her private computer servers, Hillary Clinton is a vindictive human being of seriously impaired judgement and questionable ethics whose only observable achievement is world-class grifting.  A vote to install her in the White House she once plundered ought to earn whoever casts it an immediate express ticket to the far side of Hades.

On the other side, the Republican front-runner is an abrasive billionaire businessman with weird hair and an ego the size of Australia who has insulted more people in less time than Don Rickles — although, honestly, the recipients of Mr. Trump’s ire generally deserved it (right, Rosie? right, CNN?)  And, as far as anyone knows, Trump earned his boodle more or less legitimately instead of shaking down from California to Kowloon anybody with a spare peso.  Trump is wildly popular with the seething masses in the hinterlands, and, not needing either their dollars or their approval, is not beholden to the G.O.P. establishment, a fact which has those august old crony capitalists gnashing their false teeth and soiling their silken undergarments.

Assuming that Hillary can stay one step ahead of the gendarmes, and the Donald isn’t suddenly caught smuggling Chinese hairpieces over the southern border, it’s likely to be a wild ride along the campaign trail for the next 10 months.

1 Response to Lady And The Trump