“[Donald Trump] called the Washington furor over Russian hacking a “witch hunt” when it is actually far more sinister and dangerous. Witch hunts end. The Washington mob aims to make sure the election never ends and that Trump can never govern.”  — Michael Goodwin

“…note the red herring. Whereas the real story is the content of the emails, the misdirect is how Wikileaks got them.” — Herschel Smith

With Friday’s endlessly hyped joint intelligence report facing skepticism over a complete lack of evidence to back up Obama regime claims, yet another change has been made to the story that is being used by Obama, Hillary and their allies to discredit the incoming Trump administration in the eyes of the American public … It is important to remember that according to documents leaked by former government contractor Edward Snowden that the Brits regularly worked with the NSA Stasi to circumvent constitutional restrictions and in this case, to provide cover for the official conspiracy theory on why Mrs. Clinton lost the election.  (Russian Hack Story Continues to Change) 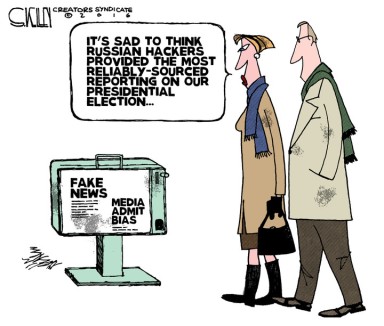 The thimbleriggers of the Trumpiphobic, permanently demented Left are still at it (Thimblerig:  1.  A swindling trick in which a small ball or pea is quickly shifted from under one to another of three small cups to fool the spectator guessing its location. 2. One who manipulates the cup in thimblerig: thimblerigger — Merriam-Webster).  The charge: Vladimir Putin and his evil cyber-hackers interfered in our election, thus causing Hillary Clinton to bungle the presidency, and the Democrats to shed even more seats in the House, the Senate, the nation’s statehouses and its governor’s mansions.  Well, excuse me, but if exposing the cesspool in which Crooked Hillary and the Jackasses routinely swam laps was interference, instead of slapping ol’ Vladdy with sanctions, we ought to be sending him a Thank You note. Of course, no one has yet to see any hard evidence which proves the Russkies were behind the Wikileaks, and it sure wasn’t Putin who blithely slandered half of the citizens of America as “deplorables”. Still, if you’re nonetheless willing to take the word of known thimbleriggers like Barack Obama, CIA head John Brennan, or NSA chief James Clapper that Grizzly Steppe done did it, then you might be interested in buying an almost-new bridge in Brooklyn.

The Obama administration is retaliating against Russia for hacking into Debbie Wasserman-Schultz’s email account. It would have been much better if the administration had reacted when Russia hacked into the White House’s and State Department’s computers in 2014, but, as Glenn Reynolds says, at that time only national security was at stake, while now, it’s something really important: the Democratic Party’s power. (“Grizzly Steppe”: Is This a Joke?)

3 Responses to Thimblerigging The Donald