Anyone who wants to know why Donald Trump feels the mainstream media is against him might want to review the results of this Media Research Center Study…and this was before he was elected president:

A new, long-term study by the Media Research Center underscores Donald Trump’s claims that the press is against him. Analysts for the conservative watchdog evaluated evening news coverage on ABC, CBS and NBC during a 12-week period from July through mid-October to find that 91 percent of the stories about Mr. Trump were negative.

Of course the mainstream media continues to bash him. Why would they do differently? They’re liberals, after all, incapable of learning from their mistakes, and they’re suffering fiercely from a debilitating parlay of Trump Derangement Syndrome and Obama Separation Anxiety.  It’s no wonder 90% of ’em went on suicide watch last November 9th.

Surveys over the past 25 years have consistently found that journalists are more liberal than rest of America. This MRC Special Report summarizes the relevant data on journalist attitudes, as well as polling showing how the American public’s recognition of the media’s liberal bias has grown over the years:

The Liberal Media:Every Poll Shows Journalists Are More Liberal than the American Public — And the Public Knows It 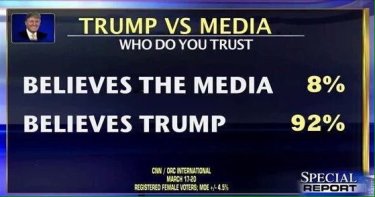 In the overwrought newsrooms and fetid broadcast booths of the progressive media, desperate propagandists and purveyors of prevarication feverishly attempt to manufacture something, anything, that will take down the force of nature that is President Trump (“He’s unhinged!” “He’s a Nazi!” “He’s a racist, an anti-Semite, he kicks his dog, and where are his tax returns!”). But they’ve never faced a counter-puncher like the Donald. These effete scriveners are not used to being hit. And they don’t like it.  What’s worse, Trump is walking right through their best shots.  He’s  got a chin like they’ve never seen! It’s horrifying!  The guy is actually quite formidable! They could even lose!

But the truth is that the media, the weird of Hollywood, and the unwashed hordes of the perpetually outraged are only proxies for the progressives, the globalists, and the Democrats, freedom’s true enemies.  And it’s not the losing that drives their unbounded dementia — after all, Donald Trump is likely to remain president until 2020 and beyond, and Hillary Clinton is likely to stay sequestered in a safe house somewhere scheming up ways to stay out of the penitentiary — it’s the idea of permanent irrelevancy.  It’s the realization that, despite their best efforts, the deplorables of flyover country have risen at last to consign them and their toxic agenda to the same reeking landfill wherein the remains of the Third Reich, the late Soviet Union, and other historical oddities lay a-mouldering. It couldn’t happen to a worthier group.

2 Responses to Firing On Fort Trumpster