“Thanks For The Memories” Sung by Bob Hope & Shirley Ross: 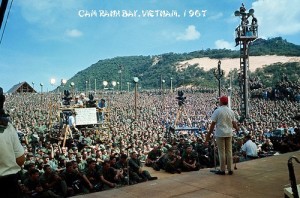 I attended Bob’s 1967 show at Cam Ranh Bay. The video of that year’s tour can be found here.  The Christmas season is my time to say thanks to an honorary veteran, now departed, who spent every Christmas away from home.  The blurbs below have been taken from various spots on the web. 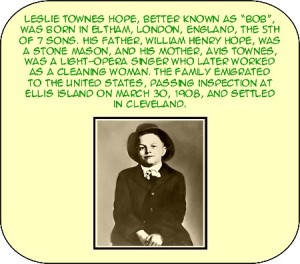 Bob performed his first USO show on May 6, 1941 at March Field, California. He continued to travel and entertain troops for the rest of World War II and later during the Korean War, the Vietnam War, the third phase of the Lebanon Civil War, the latter years of the Iran–Iraq War, and the 1990–1991 Persian Gulf War.

He crashlanded in Australia during World War II. He almost froze in Greenland and
evaporated in the heat of Morocco. The Nazis shot at him and the Viet Cong tried to blow him up. At first Bob found America’s homesick young fighting men to be the easiest audience he ever faced. Jokes that would die in the states would get uproarious laughter from the troops. In the beginning he stayed out of combat areas, but then he reasoned that those in actual battles needed him the most. Hope became addicted to the to the danger of flying in planes that might get shot down or performing in places that had recently been attacked. But he was greatly moved by the injuries he saw in hospital wards, and quietly help set up several of the soldiers he met in their own businesses after the war ended.

Bob Hope never found a more adoring audience than the GIs he entertained, sometimes under enemy fire. “He once said that as long as there are troops in a combat area, he could not in good conscience not go,” said his USO show writer-director, Mort Lachman.

Hope’s trips were filled with fun and sadness. There were the narrow escapes from danger and the frantic efforts of getting as many as 70 people organized, rehearsed and in the air to places many of them had never heard of. His stage was wherever he stopped walking. He performed at bomber bases and on decks of ships, at fighter bases and supply depots, in hospital wards and foxholes — basically, wherever a few homesick servicemen were gathered. Once, he stepped off the plane in Greenland and it was 36 below zero.

On the other end of the thermometer, Hope played in Vietnam when it was 112 degrees.When told he was being sent to Vietnam for the first time, Hope said it was the Pentagon’s idea:

In 1964, Hope took his first of many Christmas trips to Vietnam. While he didn’t bomb, he was almost bombed as downtown Saigon took the brunt of a Viet Cong surprise attack. Two years later, in a secret Viet Cong document captured by Tropic Lightning soldiers, it was revealed that the VC leadership rebuked some of its Saigon terrorists for failing to kill Hope and his entertainment troupe during that first visit to Vietnam. Seems the bombs, according to the document, exploded 10 minutes before Hope and his troupe arrived.

At Bien Hoa Air Base on Christmas Eve:

“I asked McNamara if we could come and he said, ‘Why not, we’ve tried everything else!”

In 1967, Hope’s troupe caused a rumble of its own — or as Hope called it, Hurricane Raquel. It was that year when Raquel Welch’s appearances rocked military bases all over Southeast Asia. “Loudest cheers I ever heard,” Hope wrote of her dancing in front of a sea of green uniforms.

While he did not have as many close calls at the front as Martha Raye (who often seemed to be leading the troops) Hope came close.  “I saw your sons and your husbands, your brothers and your sweethearts. I saw how they worked, played, fought, and lived. I saw some of them die,” wrote Bob. “I saw more courage, more good humor in the face of discomfort, more love in an era of hate, and more devotion to duty than could exist under tyranny.”

A 1997 act of Congress signed by President Clinton named Bob Hope an “Honorary Veteran” of the United States military.  Bob remarked, “I’ve been given many awards in my lifetime — but to be numbered among the men and women I admire most — is the greatest honor I have ever received.”

“I was with Bob on all the trips shown here, as a member of the Les Brown Band.  I just want you to know that those tours are my very fondest memories of my career.  If I could repeat just one gig from the past, it wouldn’t be one of the big Hollywood openings, or a motion picture score, or one of the presidential inaugurations, or Carnegie Hall or the White House, or any of my other gigs of the last 49 years as a professional musician in Hollywood.  I would choose to play for you guys again at Camp Eagle, or Chu Lai, or Long Binh, or Pleiku, or any of those places now forgotten by all but those who were there back when.  Playing for you guys was the absolute best.  And I’ll never forget the cheer that went up when the announcer said, ” And now, here he is…Bob Hope,” or the tears streaming down all our faces when we played our final number, Silent Night.  God bless you each, and your loved ones, and all those who live on, on that sacred Wall in Washington.  Thank you for the memories.” 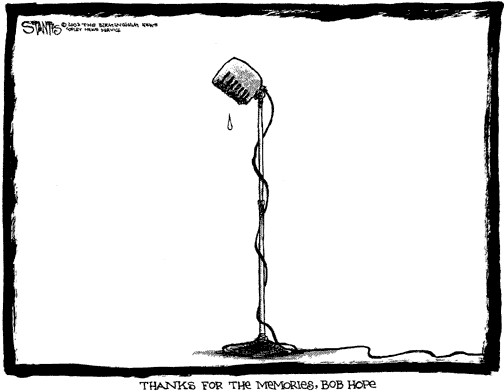